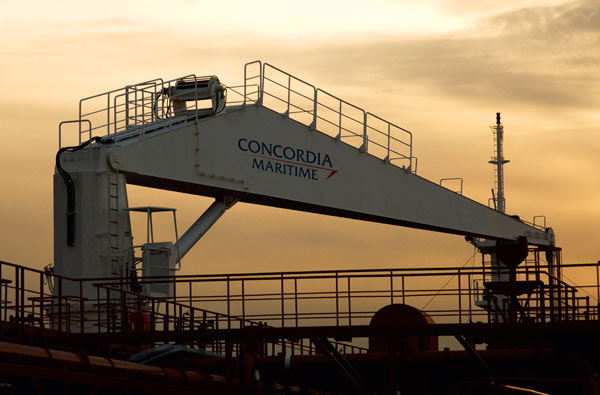 The strong tanker market continued into the early part of the third quarter, but fell back slightly in August and September. After several strong quarters, we are now seeing a certain seasonal slowdown, just as previously predicted. However, the decline is from high levels and we do not believe that it will be as deep or prolonged as in recent years. The market in the crude oil segment has already recovered and we expect a similar trend for the product tanker segment during the current quarter. Such a strong market during the third quarter is uncharacteristic and must be seen as a sign of a good balance between supply and demand.

Looking at our own operations, we have continued the process of arranging the fleet based on our defined strategy. The contract with one of the world’s largest oil and gas companies was renewed during the quarter. The contract has been extended by twelve months for two vessels and now also includes an additional vessel for six months. We have found an arrangement here that ­creates value for all parties. The client has a specific transport need for which the large load capacity of the P-MAX tankers will be well suited. For our part, the contract is fully in line with our efforts to concentrate employment on niche trades where the P-MAX tankers’ unique properties come into their own, and where there are opportunities for premium rates.

Immediately after the end of the quarter, in early October, we took delivery of Stena Important, the second of the two ordered IMOIIMAX vessels. The two vessels have been very well received by the market and have performed above expectations.

The IMOIIMAX vessels represent the next step in the evolution of our fleet. The long-term aim is to continue progressively expanding the fleet. One of our targets is for our operations to generate a return over time that allows annual fleet growth of at least 10 percent over a business cycle. However, the overriding priority is the opportunity for good business. And for trading in vessels – both purchases and sales – the ability to use timing is crucial. For our part, this means that the fleet size may vary over time. If the right opportunity presents itself, we are ready to act – whether for a purchase or a sale.

Our basic view of the market is unchanged. This means that we expect a strong conclusion to 2015 and a strong start to 2016. Based on a well functioning operation and a balanced contract portfolio, we consider ourselves well positioned to take advantage of the market situation.