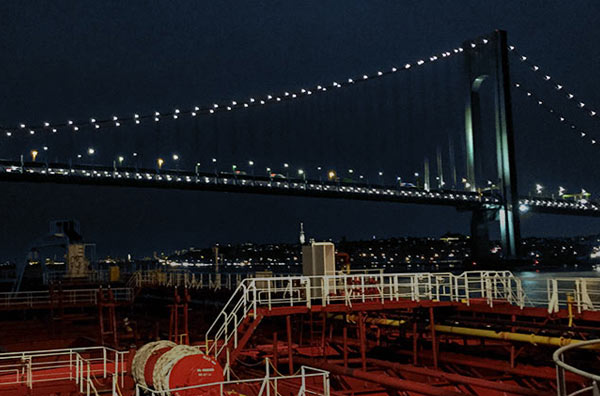 Market bottoming out – gradual improvement from next year

Concordia Maritime continued to generate higher earnings than the overall market in the quarter, but the generally weak market still led to a negative result before non-recurring items for the quarter. Result excluding impairment and tax for the third quarter was MSEK –59.4 (–22.4). EBITDA was MSEK 1.9 (50.9), corresponding to MUSD 0.4 (5.9).

We are now in the sixth consecutive quarter in which the market has been weak or even poor. One of the main reasons is record-large stock building of oil and oil products throughout 2015 and in the first half of 2016. Full inventories in the second half of 2016 and 2017 have resulted in subsequent destocking – leading to a reduced demand for transport. In addition, there were extensive deliveries of new vessels, the overall result of which was a ­situation where vessel supply exceeded demand for transport.

Freedom of action and room for manoeuvre

Tanker shipping is both volatile and cyclical in nature. In order to bridge periods of weak markets, there are requirements for financial sustainability and a business model that can be adapted to a specific market ­situation. This is the basis on which we have built our strategy.

The weak market since the middle of 2016 did not come as a surprise to us, but was expected and we have adjusted step-by-step according to the current situation. Financially, we have strengthened ourselves through three sale & leaseback transactions and refinancing of the entire P-MAX fleet at favourable terms. The measures have resulted in a strong and stable financial position that gives us important freedom of action.

In parallel, efforts to identify and secure niche trades for the vessels in the fleet continue. During the quarter, we signed a chartering contract for the P-MAX tanker Stena Provence. To see these efforts bringing a renewal of confidence from one of the world’s largest oil and gas companies for the fourth consecutive year is obviously very pleasing. A further three vessels on fixed and relatively good time-charter contracts are helping to secure future income. Income for the vessels employed via the cooperation with Stena Weco and Stena Bulk is higher than the market. Income for the two newly chartered MR tankers will also start to generate profits during the fourth quarter.

As an effect of the weak markets during a number of quarters, market values for tankers have declined considerably. Although the P-MAX vessels continue to show better earning capacity than the market (Clarkson MR World Wide Clean Index), and despite high customer satisfaction from demanding oil companies and industry-leading vetting statistics, the market values have fallen. In addition to weak markets, vessels’ market values are affected by new regulations on ballast water, new regulations on bunker quality and the market’s increased focus on vessel ages. These changes concern the entire industry and it is our assessment that they have partly affected the latest market values for the vessels that the Company brought in on 30 June. The Board has made an analysis of the consequences that these changes may have. It is the Board’s conclusion that the changes have a negative impact on the Company’s future cash flows and an updated impairment test indicates impairment. An impairment loss of SEK 473.7 million has therefore been reported in the quarter.

No serious incidents and continued reduction of environmental impact

From a purely operational perspective, we have reason to be satisfied. We have continued to be spared from accidents and serious incidents. This is something that is often taken for granted, but behind the development lies an extensive focus on continuous training and education, compliance with procedures and monitoring of processes. In addition to the continuous safety work, we also allocate considerable resources on reducing our environmental and climate impact. A major focus here is on reducing  emissions into the sea and air. It is pleasing to note that we reduce the emissions even more than the targets for the quarter.

Gradual improvement of markets from 2018

We can clearly see that inventory levels are falling and we expect this to translate into increased demand for oil transportation, and therefore tankers, within 3–6 months. On the supply side, the order book is low and net growth in new MR vessels is only expected to be 1–2 percent in 2018. However, the crude oil tanker order book remains. All in all, this means that we substantial expect a gradual improvement from next year.

Our own position is stable. We have good vessels, a good contractual balance and a strong financial position that enables us to cope with the current weak market – but also to be ready to act when the expected stronger market arrives.