Events after the reporting period 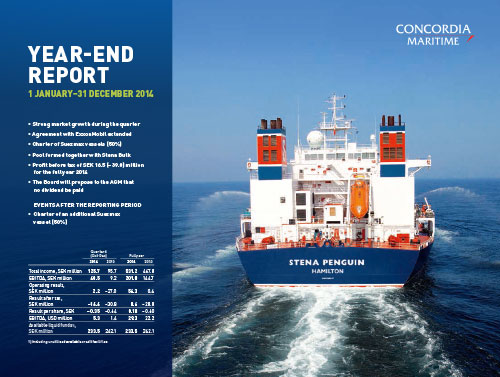 Overall, we are reporting a profit before tax of SEK million 16.5 (–39.0) for the full year 2014. Earnings have been positively affected by the sale of investments in jointly-controlled entities, which were the 50–50 owned panamax vessels Stena Poseidon and Palva. Operating cash flow (EBITDA), ­including the sale of the above investments, amounted to SEK 201.0 (144.7), million, ­corresponding to USD 29.3 (22.2) million.

Looking at the full year, both the crude oil and product tanker markets strengthened compared with the previous year. This meant that the market trends were broadly as we had previously predicted. However, the quarters differed significantly. The second and third quarters were much weaker for the product tanker market than we had expected, while the end of the year was considerably stronger.

For Concordia Maritime, 2014 was very much focused with positioning and arranging the fleet in line with our new employment strategy. The overall aim has been – and still is – to optimise vessel utilisation, thereby creating the best possible conditions for good profitability. A fundamental aspect of these efforts has been to concentrate employment on trades and cargo systems where the P-MAX vessels' unique properties come into their own. The work has been partly successful and has resulted in half of our lighter products vessels being employed on different niche trades during the year. Stena Paris, for example, sailed on one of Total's niche trades from Southeast Asia to Polynesia, where her extremely shallow draft was of particular benefit. Stena Provence and Stena Polaris were contracted for half of the year by ExxonMobil for consecutive transportation of refined petroleum products in the Asia Pacific region. P-MAX tankers were also able to successfully take advantage of the increased demand for transportation of light products between Europe and West Africa. Here too, the utilisation rate was high in terms of the vessels' load capacity.

The contract with ExxonMobil for consecutive transportation with the P-MAX tankersStena Provence and Stena Polaris was renewed during the quarter. The new contract is valid until the end of June 2015.

During the quarter, we and Stena Bulk established a pool for the four P-MAX tankersStena Perros, Stena President, Stena Penguin and Stena Primorsk. The tankers will transport heavy petroleum products, primarily in the Atlantic ­market. The pool enables us to optimise incentives for efficient vessel utilisation. Two of the vessels in the pool were chartered out to Stena Bulk on one-year contracts at the end of the year.

In early December, we took a position in Stena Bulk's suezmax fleet corresponding to a 50 percent charter of one tanker. After the reporting period an additional position corresponding to a 50 percent charter of a Suezmax vessel was taken. The increased exposure to the crude oil segment reflects our continuing confidence in the segment, which has started 2015 strongly.

There has also been a strong start to 2015 for product tankers and, looking at the market as a whole, several factors indicate that the positive trend will continue. In particular, the changes taking place in the refinery area, with a shift from European predominance to the Middle East and Asia, is resulting in increased transport distances. At the same time though, a large number of vessels will be delivered in the coming year.

However, our overall assessment is that the market will continue to develop in a positive direction during 2015 and 2016.

For our own part, the focus in 2015 will be on continued positioning and employment of the fleet based on given market conditions. We shall also be taking delivery of the two new IMO2MAX vessels during the year. We have high hopes that their high load flexibility and energy efficiency will help us deliver good profitability – thereby creating scope for continuing growth.